Profiles of the Wines for the Evening 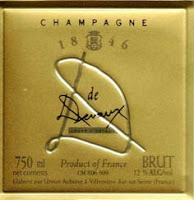 Founded in 1846, the Champagne of Devaux was taken over by Madam Auguste Devaux, one of Champagne’s great characters who ran their companies with as much energy as skill. The company was renamed “Maison veuve A.Devaux” on her death.
Each Cuvée endorsed by Devaux owes its character to the 1,400 hectares of vineyard situated in the heart of the Côte des Bars which produces some of the best Pinot Noir in the whole Appellation. In this attractive countryside of hills and valleys, 750 vignerons use the skills of their ancestors to produce the flavours and character of great Champagne. 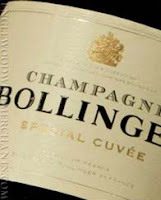 The history of Bollinger is that of a family in the Champagne region of France over centuries. For five generations, Bollinger has remained a family House.

Madame Jacques Bollinger, who was familiarly called “Aunt Lilly”, took over the reins in 1941 following her husband’s death. She succeeded in giving the firm new impetus whilst maintaining extremely strict rules regarding quality. Her efforts have been carried on by her nephews Claude d’Hautefeuille, Christian Bizot and now Ghislain de Montgolfier.

La Grande Année is the Prestige Cuvée of Champagne Bollinger. It is only produced when exceptional quality harvests occur, and is the expression of Bollinger’s know-how. More than the illustration of the vintage particularity, La Grande Année is the result of the Bollinger style, of its exceptional "terroir" and traditional wine making techniques. La Grande Année develops a beautiful rounded structure and combines rich, complex and intense aromas, the expression of which changes according to the characteristics of the vintage.

The grapes come exclusively from Grands and Premiers Crus. 17 villages have entered in the 1999 blend, 82% from Grands Crus and 18% from Premiers Crus. The blend of La Grande Année 1999 is composed of 63% Pinot Noir and 37% Chardonnay

Capannelle, wine producers in Gaiole in Chianti, Siena, extends over about 20 hectares (16 of Vineyard) and produces about 70.000 bottles of wine a year. The owner is James B. Sherwood, founder and shareholder of the Orient Express Group Hotels.

The history of Capannelle wine production dates back to 1974, when Raffaele Rossetti, a 40 year old business man in the field of laminated plastics in Rome, with experience at the Enrico Mattei's ENI, decided to purchase an old XVI century farmhouse in the heart of Chianti.

Chardonnay variety were grafted to the base of the Trebbiano and Malvasia Bianca vines. So in 1988 Capannelle’s Chardonnay was born, fermented and refined in barrique.

The white wines of Puligny-Montrachet are probably the most famous and most widely acclaimed in the world. This is undoubtedly due to the local microclimates and the clay, siliceous sand and lime contents of the soil. The domaine of Etienne Sauzet is made up of 26 acres, much of it in the heart of the premier crus vineyards of Puligny-Montrachet. Gérard Boudot, owner and winemaker of Domaine Sauzet, is seeking "maximum finesse and an individual expression of the climat." M. Boudot, who married the granddaughter of the late Etienne Sauzet, runs the domaine and has modernized and improved the vinification, making the wines of this domaine among the most sought-after white wines of Burgundy. The estate has been bottling 100% of its production since the early 1950's. Since 1975, the domaine has been selling the entirety of its production in bottle. M. Boudot ferments and ages 100% of the premiers crus and grand crus in small oak, one-third of it being new French wood. The average age of the vines is 30-35 years. "This is one of the most serious estates in Burgundy. The wines are usually among the very best made... They are textbook white burgundies, brimming with flavor, yet elegant and well-balanced." Robert M. Parker, Jr., The Wine Advocate

Jean-Charles de la Morniére is an architect by training, yet in 1993 he forsook his practice and returned to the family property to run what is one of the leading white wine domaines in the Côte D`Or. The domaine has 11 hectares of vines, all in one continuous holding located on the Pernand side of the great Corton hill. Yields are severely restricted and in the cuverie as many as 16 different parcels of grapes are vinified separately in order for their respective "terroirs" to be reflected in the wine.
Fermentation begins in stainless steel and finishes in casks to which it is transferred 5-6 days later. They are matured in oak barrels (33% new) for 12 months and the separate cuvées are then assembled in stainless steel before being returned to cask for another 6 months prior to being bottled. Bonneau Du Martray also produces a small quantity of red Corton

Tasting Notes:
Color: Medium golden radiant color.
Nose: Awesome nose. Rich, powerful deep and broad. Tons of mineral, steel, wet stones and white fruits [pears, apples] aromas. By now the nose reveals it all. Worth waiting.
Palate: Mouthfilling, rich, concentrated wine wonderfully structured yet completely yielding by now. Mineral flinty flavors abound. On the palate this Corton Charlemagne is so intense that it had no problem coping with and complementing the rich in flavors and even spicy oriental dishes.

From the first wave of European settlers in Marlborough, the Forrest family has grown deep roots in the region. This historical connection and tradition drew Drs John, Brigid and family back home to Marlborough in 1988 from successful international careers in biomedical research. Vintage 1990 saw the first Forrest wine, and immediate success with their 1990 Cabernet Rose that was awarded the Directors Trophy for Champion Rose/Blush at the 1990 Air New Zealand Wine Awards. Many more gold medals and trophies have followed, both national and international, including the title of New Zealand’s Winemaker of the Year being awarded to John at the 2001 Royal Easter Show.

Tasting Notes:
Deep crimson red with a purple-black core. Concentrated bright red fruit and new leather with a whiff of charcoal on the nose and an amalgam of pepper, liquorice and allspice in the palate with cherry, plum and blackberry fruit swimming in chocolate liqueur and a musky rose petal character to the finish. An extravagant wine with powerful yet smooth tannins and beautifully integrated cedary oak. Screwcap. 14% alc..

Felton Road wines is located in Bannockburn, Central Otago in New Zealand, the most southerly wine growing region in the World. Here, vineyards are nestled into small macroclimates totally surrounded by high mountains, many of which are snowcapped all year round. Though the location is on the edge of sustainable viticulture these macroclimates consistently combine hot days, cool nights and long dry autumns: perfect for the creation of fine Pinot Noir, Chardonnay and Riesling. The latitude of 45 degrees south is similar to the Willamette Valley in Oregon and some of the finest wine regions of France.
H.S. Wine Spectator Insider, USA. February 8, 2006: 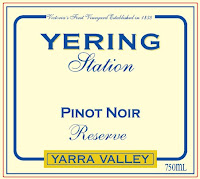 www.yering.com/
Victoria's first vineyard, Yering Station, was originally planted in 1838. This historical wine estate was purchased by the Rathbone family in 1996, marking the beginning of a new era, with the construction of a state-of-the-art winery and award-winning wine tourism destination.

Yering Station claims its historical significance and is complimented by one of the most innovative and modern winery facilities. Yering Station winemaking employs traditional, old-age techniques with new world style and sophistication.

Tasting Notes:
Colour: Bright red.
Nose: Intense and intricate, this wine is perfumed with red berries, black cherry, plum and some chocolate
and kirsch aromas with foresty hints. Fine French oak adds charry, smoky complexity to the wine.
Palate: Richly peppered with layers of berry, chocolate and licorice this wine has concentrated flavours with great elegance and fine, silky tannins. It has a lingering finish. 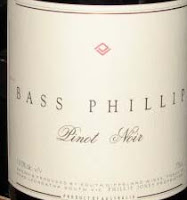 Established by Phillip Jones in 1979, the vineyards are located in prime dairy country near Leongatha, South Gippsland, at the southernmost part of Victoria, not far from Phillip Island and Wilson's Promontary. Named after early explorers of the region, George Bass and Arthur Phillip, Bass Phillip lies close to the sea, but far enough inland to experience a continental climate ideal for grape growing. "The difference between good and great Pinot Noir is texture!" -Winemaker Phillip Jones Bass Phillip»

Distinguished Langtons Classification. Phillip Jones has been producing icon Australian Pinot Noir from the cool climes of Leongatha at Gippsland for over two decades. "Phillip Jones is a perfectionist and crops his fruit at incredibly low levels, an almost insane passion and attention to detail, has resulted in the most exquisite of Australian Pinot Noirs!" -Andrew Caillard MW, "Painstaking site selection, ultra-close vine spacing and the very, very cool climate are the keys to the magic of Bass Phillip and its eerily Burgundian Pinots!" -Wine Companion.com.au 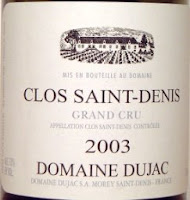 Louis Seysses, biscuit manufacturer and gastronome, had a taste for good food and fine wines. His son Jacques Seysses quickly came to share his father's passion, and he decided he would not only like to drink the wine but make it as well. With the help of his father, Jacques began his career in wine with an apprenticeship with Gérard Potel at the Domaine de la Pousse d'Or. He spent two harvests there during which time he was lucky enough to talk and listen to the famous

Burgundian winemakers of the times whom he greatly admired.
In 1967, he seized the opportunity to purchase the Domaine Graillet and renamed it Domaine Dujac. Trying to blend what he admired in traditional winemaking with modern techniques, Jacques went on to refine a style of his own. Although the first vintage made at Dujac (1968) is the worst known in the last forty years, the following vintage more than made up for this difficult start (1969 remains one of the most superb vintages made at Dujac).
The Domaine Dujac wines did not go unnoticed long. In 1974, they were discovered by Gault & Millau. Thanks to favorable press and his father's connections in the world of gastronomy, Dujac wines were soon to be found in prestigious restaurants throughout France.
A hint of reduction partially hides the aromas of earth, underbrush and a certain animale quality though the rich, full-bodied, refined and notably elegant flavors possess a subtle and understated complexity and considerable grace. Very much like the balance here and this could surprise to the upside if it adds a bit of weight.

William Ponsot was born in St Roman in Cote d’Or. On his return from FrNCO-Prussian war, he purchased a vineyard in Morey-St Denis where he made his home in 1872. Already at this time, his most important parcels were Clos des Monts-Luisants and a parcel of Clos de la Roche. He also grew other appellations, such as Gevrey Chambertin Les Combottes. Hippolyte Ponsot took over the estate in 1920. Joined by his brother, Hippolyte Ponsot substantially increased the area of Clos de la Roche vineyard.

Slight bricking on the edges, nice black cherry nose followed by cherry and blackberry flavors, medium intensity, nice long finish. After an hour in the glass this wine started to dry out and turn bitter. I'd recommend drinking up.